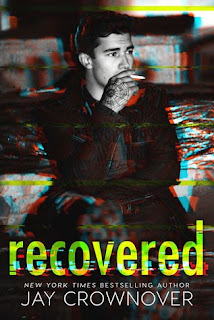 I'm not sure if you know about a group called Crownovers Crowd over on Facebook but I'm here to say that if you don't know then you're welcome. (I'm about to inform you.) Crownover's Crowd is a page on FB where fellow Jay lovers can gossip about her new books, talk about other authors, share photos, host giveaways, and basically just enjoy themselves. Another fun tid bit is that Jay herself is frequently on the page! If you'd like to check it out click HERE   It was on this page I found out about Recovered and saw a lot of people comparing it to Rule which most of you know is my favorite. So obviously I had to go buy it the MOMENT it came out.
Can I just say it was everything I had hoped for? Actually may I also say that it did in fact remind me a lot of the Marked Men and their damaged ways?
Like her other books - at least the ones I have read - Recovered is told in multiple POVs. Affton is shy and good. Cable is outspoken and edgy. Affton is smart and driven. Cable is a slacker and unmotivated. Affton is the daughter of an addict. Cable is an addict.
The two of them "meet" in high school and spend their days avoiding each other. Cable is popular and although he notices Affton he doesn't waste his time on her. Affton Reed isn't considered popular and basically is counting down the days until she's out of that school, away from Cable McCaffrey, and in college reaching her goals. Although she avoids him as much as possible the day comes when Affton approaches Cable to tell him she knows he's doing drugs and that he should get help. After blowing her off she reaches out to his parents. Before he can be sent to rehab the unthinkable happens and he ends up in jail.
Flash forward and Affton has just graduated and is approached by Mrs. McCaffrey to basically babysit Cable for the summer now that he's out of jail. Not only does she want her to watch his every move to make sure he's not using again she's willing to blackmail Affton into getting what she wants.
Reluctanly Affton moves into the McCaffrey beach house to watch over the boy she's always hated.
I absolutely 100% no doubt about it am in love with this couple. Jay has such a way of making you fall in love with her characters. Watching the two of them with each other wasn't like many romance stories. There is hurt and pain and a whole lot of feeling.
If you've read any of Jays books or even if you haven't I definitely recommend you pick up Recovered. I think I might even read it again soon ;)

Listen to my playlist for Recovered on Spotify by clicking HERE
Posted by KayleighCalling at 9:00 AM