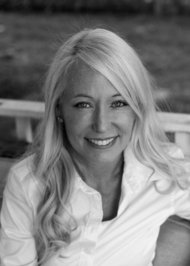 I have to tell you guys, when I reached out to Elizabeth about doing an interview with me and then actually got a message back from her....I freaked out.
Like I said in my review for Waking Olivia it's one of my favorite books of the year (definitely one of my all time favs as well) so to actually be able to interview the woman who wrote it, well, it was pretty damn exciting. So thank you Elizabeth for not only taking the time to answer my questions but also for writing such an incredibly beautiful book.

Alright guys, I hope you enjoy :)


1. When doing some research I saw that you used to be a medical writer, how did you make your way to writing romance instead?
I quit work to stay home with my kids. When I realized I was going to be getting a divorce, I knew the clock was ticking...that I'd be going back to work and between that and the kids I'd never have the energy to write a romance, which had always been a goal. So I cranked out Undertow right after I left.

2. Waking Olivia is the first book I have read from you and I recently finished Undertow. (I LOVED both.) Out of all that you've written which would you recommend the most to new readers?
Of all the ones that are published, Waking Olivia. But to be honest, I really think my book that comes out in June (Parallel) is by far the best thing I've written.

3. I went crazy for Will and Olivia from WO, which book couple makes you swoon?
That's so hard. All the couples from question #7. Plus every couple Megan Hart writes, Aiden and Alex from Jennifer Armentrout's Covenant series. Tris and Four from Divergent, Grace and Jack from Alice Clayton's RedHead series.

4. What advice would you give to aspiring writers?
Make friends with other authors! They're going to be, hands-down, your best source of advice and support when you publish. Read books about writing, especially plotting, I'm still learning too, and just sent 50 pages to this big-time editor solely in order to learn...her criticism was a little painful but I learned so much from it.

5. If someone approached you and said one of your books could be turned into a movie, which book would you want it to be?
Parallel - it just has a crazy, trippy plot and lots of suspense.

6. Okay okay, so the book is becoming a movie now, who's starring?
For the new book, Theo James (the guy who played Four in Divergent)  and Alicia Vikander (Tomb Raider). For every other book, still Theo James, lol.

7. The moment I started WO I knew that it was going to be one of my favorite books - the kind I can read over and over again. What are 3 books that you can repeat read?
I read these three books repeatedly: The Hating Game by Sally Thorne, The One Who Got Away by Bethany Chase and Sweet Filthy Boy by Christina Lauren. And if I can sneak in a fourth, The Bronze Horseman by Paulina Simmons...that one is crazy long so it's not an annual read, but I've definitely read it at least three times.

8. If you could hang out with one couple from your books and date another character who would you choose?
Hmmm...the couple I'd hang with is probably Maura and Nate, from Undertow. Because they'd be chill and Maura's the character I feel is the most like my friends. To date? It would probably be Nick from the book that's coming out...he's smart and funny and he was a college swimmer, which is a personal weakness of mine.

9. What is the best thing a reader has said to you?
People have said lots of nice things, but the one that stands out because it's awful and still makes me laugh years later is "If she checked her grammar as often as she uses the F word I'd have given this more stars."

10. If Waking Olivia had a theme song, what would it be?

That's easy! "Figure You Out" by Citizen. I was really struggling with the end of this book and as soon as I heard that song I felt like I had it. I was on a date and all i wanted to do from that point on was go home and write. 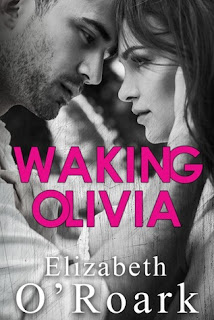 That's the first thing I read when I looked this book up on Goodreads. The second I finished it I started reading Waking Olivia.

Hands down, one of my favorite books of the year.

And yes, I know it's only May.

Olivia is a runner on her college track team with a seriously dark past that she can't seem to remember. Almost every time she wakes up it's in a different location because she basically sleep runs.

Will is the hot track coach who has plenty of his own baggage. He came home to help his mom on their family farm after his father passed and is struggling pretty bad.

Right away the two of them are at each others throats. Olivia can't keep her mouth shut and Will instantly doesn't like her. When she keeps showing up tired and not performing at her potential Will practically forces her to admit that she's running throughout the night. Not sure if he believes her he sits outside her place and sure enough, off she goes. Thus begins her sleeping at his home with him and his mother. What starts off as a coach trying to help his athlete turns into some serious sexual tension - which to be honest is heavy through the entire book.

I'll be honest, I don't always like characters who push things the way Olivia does but I LOVED her. I wanted so desperately for her to let Will in because I felt like she deserved it. I felt like she needed to know that it was okay to actually need someone and let them help you. I also have a massive crush on Will. He is by far one of my favorite male characters I've read this year and probably ever. Watching the two of them navigate their relationship was at times stressful but also really exciting.

I also adored Will's mom and brother and many other characters in Waking Olivia. There really is not one thing I can say I didn't like and that rarely happens.

Without a doubt I recommend you read this book!

Buy Waking Olivia Here:
Amazon
Kobo
Posted by KayleighCalling at 9:00 AM No comments: