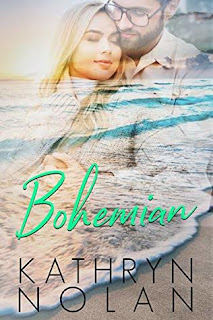 Listen to my playlist for Bohemian on Spotify by clicking HERE
Posted by KayleighCalling at 9:00 AM No comments: 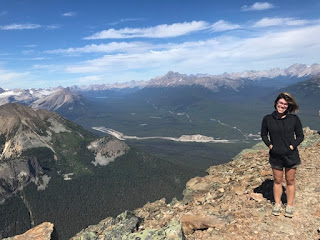 You. Guys. I am so happy today that I have another Duff story for you. Not only that but it's by Kathryn Nolan! If you haven't heard me gush about her let me go all proud mama for one minute.

Kathryn is literally one of the SWEETEST people I've ever had the blessing to talk to. Her writing is absolutely breathtaking and just in talking to her and reading her works you feel content and happy. If you haven't checked out anything she's written please take my advice and go get all of her books. Well, read this first please. ;) Major thank you's to you Kathryn for taking the time to write this for me as well as for my friends. <3

The DUFF moment I want to share is about an extremely challenging hike I was on with my husband in the summer of 2017. We were camping at Lake Louise in Canada (one of the prettiest places in the whole world) and had just hiked about four miles (all uphill) and I was definitely having an “off” day. It didn’t help that Rob (my husband) didn’t seem that tired or overly exerted from our hike – and when we reached the trailhead for a second hike, he really wanted to do it. It was only a mile or so up, and the view was supposed to be fantastic. The hike was to the summit of Fairview Mountain (if you’re ever at Lake Louise definitely do this hike – its worth it) but I was hot, tired, hungry and my legs already felt like lead from the four miles we’d just done (and still had to do to get back down to our campsite).
Rob took off and I told him to go ahead of me – something we rarely ever do when hiking. But I was exhausted, and not feeling it, and wanted to be on my own to suffer. The one-mile hike to the summit ended up being grueling switch-backs so steep that half the hike you have to pull yourself up the rocks on your hands and knees. Every hiker I passed coming down was cheerful and enthusiastic and encouraging. I was actually in tears – it just felt insurmountable to me.
But I kept climbing – suuuuuper sloowwwly – and even though it was slow, it was steady. Every time I turned around, I was gaining altitude, getting higher, and all around me I could see the mountains, the forests, the crystal-blue-green glacial lakes. The hikers I passed told me, every time, that I was absolutely almost at the top, until – after about an hour – I was.
I was crying pretty hard at this point – I’d crossed over from exhaustion and pain into feeling like a bad-ass that I had done it. On my own, with no help. The last hundred yards I could look up – see Rob waving down at me from the top. He raced back down, and then we reached the summit together. I cried (again) and then realized that we were standing on top of the world. I could see all of Lake Louise as well as other, smaller lakes in the distance I would never have seen if I hadn’t climbed to the top. I could see mountains, cliffs, other hikers stretching around for miles and miles. It was one of the most emotional views I’d ever experienced.
On my way down, Rob and I got to say you’re almost there, promise – to the bedraggled hikers that we saw. Two hilarious best friends stopped and asked if I would take their pictures. They were hungover from doing too many shots the night before, but were persevering on and laughing along the way. We then got to experience the bliss of a hike that ended all the way downhill – followed by Canadian beer along a quiet river.
I think about that hike often when I’m struggling – how hard each step felt, how victorious I felt at the top, the emotions swirling in my chest. It was just a hike on a warm sunny day, but it’s really become a symbol to me of slowly moving forward, one step at a time. It taught me that I can do anything – that it might hurt, I might cry, and I might even have serious doubts. All those things are just as important and real as the triumph at the end.

Books I've read and their buy links:
Strictly Professional
Bohemian (a review will be up next week! ahhhhh)
Landslide (there will be a review of this one up next week too! I can't hardly contain myself! I've been having a dance party every night because I'm so excited.)
Wild Open Hearts

Posted by KayleighCalling at 9:00 AM No comments:

Guys! Today I have an exclusive excerpt for you on Trouble by Gabrielle G. Are you excited? I know I am!

Trouble just came out TODAY!! You can order your copy on Amazon by clicking HERE

Okay, okay, enough with all that, here's the excerpt!!

Just kidding, hehe. Before you dive in I just wanted to put a disclaimer out that this is definitely not a book for kids and if you're not of the appropriate age to read about s-e-x then I strongly encourage you to click off of here!

Okay all you naughty people who stayed, carry on.


"What about this one?" Lars dangles the tiniest bikini he has found in the shop on his finger. It's more a fingernail than a piece of clothing.
"Perfect, let me try it on first and walk around the shop to be sure everyone appreciates it."
"No way, woman," he grunts, "I want you to wear it inside."
"Why would I wear this inside when I could be naked riding your cock?" I quirk an eyebrow.
"Because suggestive clothing is a veil to desire. I prefer to have a peek behind the curtain than being invited to a show with the curtain wide open," he shrugs.
"I know. And that's because you're a man of the shadows, babe. Buy it if it rocks your world. I'll wear it for you tonight. But for the beach, I need something covering a lot more." I continue my search through the rack until I find a cute black bikini. I turn around to show Lars and find him scrutinizing me.
"What?"
"I need to try on my bathing suit," he says, zooming in on my breasts.
"So stop looking at my tits and go." I point at the changing room. The shop is the typical surfer shop full of clothes and bracelets made from recycled plastic you find in the ocean. It's tiny and has a hippie beach vibe to it no one can resist. It even smells like monoi and coconut.
"I can't." He smiles. I can see the glimmer in his eyes that it's nothing serious. Probably, one of his stupid ideas like how he decided he always needs a couple of beers or he will get an earache. To this day, he still believes that if he has only one, his ear will not hurt.
"Why?" I roll my eyes not even waiting for his answer before knowing it's stupid.
"I don't think it's a good idea to try on a bathing suit with a hard-on," he whispers.
"Because you can catch HDD?" I smile.
"HDD?"
"I read it somewhere Lars. If you try on bathing suits with an erection, you might get Hard Dick Disease, and Mr. Selfish will stay in that state for your girlfriend to ride you whenever and wherever she wants. It's scientifically proven." I laugh at my own joke. Lars smirks.
"You're a dork."
Posted by KayleighCalling at 9:00 AM 3 comments: