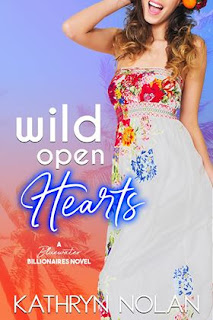 Have you ever cried because you're so happy?

Like when Shadow comes up that hill at the end of Homeward Bound? Yeah, I know, I'm tearing up just thinking about it.

That's how I felt when I read Wild Open Hearts. My heart was so full of love that I was skipping around my house and smiling as big as I would if I just entered a donut shop.

I knew going into this that I would love it. No, that's not just being an optimist, it's because I loved Luna the second she was introduced in The Price of Scandal. I fell more in love with her in The Mogul and the Muscle and I knew with absolute certainty that I would be silly happy when I read this book.

Luna is a total free spirit. She's a vegan who loves animals more than most things, she's an eternal optimist, beautiful and incredibly caring. Unfortunately a scandal threatens her company and everything she's ever worked for. To help the public see her for her true self she volunteers her time at a local non profit called The Lucky Dog. There she hopes to not only fix her current image but to mostly help the dogs as well as the workers who give everything to the dogs.

The owner of Lucky Dog is not as sun shiny as Luna though. He's moody and grumpy and comes from a family that is involved with Miami's most notorious biker gang. Even though Beck knows that Luna's presence and connections could help The Lucky Dog tremendously, he's hesitant to work with her. Not trusting her is at the top of his concerns, followed closely by a fear that she will make them look like a pathetic charity case. He doesn't want her pity and boy oh boy does he give her a run for her money. And she has like a lot of money.

As their partnership continues you get to watch the two of them grow into something amazing. Beck begins to let Luna in and the love begins to grow. Fireworks. ;)

It was so fun to see Cameron, Daisy and Emily again and watch them interact with Luna and Beck. Bluewater itself is so fun and the way these books are written you really feel like you're there.

I absolutely adored this book. I smiled so much when I read it that my cheeks hurt. I teared up in parts and I laughed out loud in others. It is everything that I hoped it would be and more. So much more. I 100% recommend this book to you, as well as the others in the Bluewater Billionaire's series.

P.S. Anyone know where I can buy a flower crown?

Listen to my playlist for Wild Open Hearts on Spotify by clicking HERE
Posted by KayleighCalling at 9:00 AM