Off Sides by Sawyer Bennett 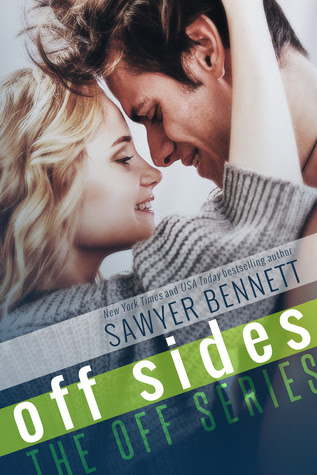 I read the book Rommates a few weeks back and afterwards realized I really needed to read another book about a hockey player. I was hoping that I could find a book that was equally entertaining but perhaps a little bit less...fowl.
Luck was on my side when I found this book.
In Off Sides we follow Ryan and Danny who are complete opposites but absolutely perfect for one another.
Ryan is from a higher class family and Danny has basically taken care of herself her entire life.
One night Ryan goes out to eat with some friends - and his awful ex girlfriend - and Danny is their waitress. The ex makes a snotty comment towards Danny but instead of getting her feelings hurt Danny completely owns her and shows off her brain in doing so. Not only did she put the ex in her place but she's also beautiful and Ryan notices.
The next day Ryan goes back and asks Danny out on a date and the rest is history.
The two of them go through quite a bit because of their differences in family which gets kind of frustrating. Ryan's mother doesn't feel like Danny is good enough and as a reader it makes you mad. Danny is a very likeable character and you find yourself really rooting for her and Ryan's relationship.
I loved that Ryan is a hockey player but isn't as big of a pig about it as some of the characters in the book I mentioned earlier. He was romantic and sweet and basically everything a girl wants in a guy.
Danny is sweet but she can take care of herself and that is not only likeable but inspiring.
I really enjoyed Off Sides and I would definitely recommend it!!

Playlist coming soon!!﻿
Posted by KayleighCalling at 9:00 AM