Withholding Nothing by Victoria Bright 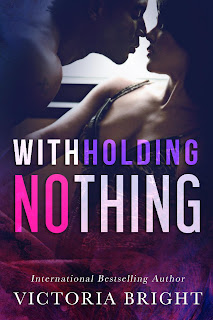 I'm not going to lie to you guys, I was sent this book for review and then forgot that my review was due...today. Yesterday I was looking at my planner that is specifically for my blog and I saw that my review was supposed to be up on April 10th. I thought okay cool that's a while away, um no, it was the next freaking day. So as soon as my son was occupied with his movie for the evening I turned on my kindle and started reading.
Again, I'm not going to lie to you guys.
I hated it.
Like within the first couple of pages.
I didn't like Ashton, I didn't like her friends, couldn't stand the way they talked to each other, hated the stupid stupid decision she makes in the beginning, and thought O'Shea was a tool. It was like the author was trying to make them funny in scenes and have that whole "witty banter" but I thought it was reaching. It wasn't easy and funny like I've read before and it bugged me. I almost put it down multiple times but then a nagging little part of me wanted to know what was going to happen.
I'm glad I kept going because I did end up liking it. It's kind of funny because I feel like the more the book continued the more natural things became and that's what I was looking for. I hate forced comedy and romance and I thought that's all I was in for.
The gist of the book is Ashton is recently single after being dumped by her douche of a boyfriend who is now engaged to one of her former best friends. What a witch with a b, am I right? Not only is she reeling from her recent heartbreak she also is in desperate need of a roommate to share the expenses of her apartment. Her only source of income is working as a Phone Sex Operator. Oh yeah, you read that right.
Enter O'Shea who is the new mechanic at Ashtons best friends uncles auto shop. Was that confusing enough for ya? Phew. Anyway the two meet and instantly Ashton can't stand him. **Que the third time I almost put the book down***
Back at home while taking phone calls Ashton gets a call from a guy who she's instantly attracted to, which has never happened to her while working. Not only does she have a very intense conversation with him she also gets an email from someone wanting to be her roommate. Yay, things are looking up. That is until she goes to meet up with her potential roomie and it's non other than O'Shea. After much discussion she reluctantly lets him move in. Flash forward and she's sitting at home taking calls and the sexy caller from before hits her up again. She finds herself wishing she could be with him in person when bum bum bum, she finds out that her sexy mystery man is none other than her rommate the oh so infuriating O'Shea.
As I said earlier I wasn't a fan at the start, probably about 30-35% of the way through, but once I got invested I really didn't want to put it down. I really grew to like them as a couple and even found myself laughing in certain parts. I also finished this in about 5 hours so that should tell you all something. :)
I'm so happy I ended up liking it too because I never want to give bad reviews. Authors work really hard writing stories to share with us and I never want to discourage someone from their dreams. Thankfully I had a happy ending with Withholding Nothing.

Listen to my playlist for Withholding Nothing on Spotify by clicking HERE
Posted by KayleighCalling at 9:00 AM