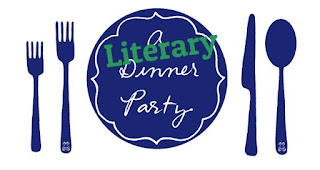 1. One character who can cook/likes to cook
Anastasia can cook pretty well in Fifty Shades so we'll go with her.

2. One character who has money to fund the party
Hmm...well Christian Grey has a lot of money...not sure how he'd feel about funding a party and Ana cooking though.

3. One character who might cause a scene
Nan from the Rosemary Beach series. She's a pain in the tush more often than not.

4. One character who is funny/amusing
Patrick from Perks of Being a Wallflower is super funny and I think he'd make an excellent dinner guest.

5. One character who is super social/popular
Brett from Until It Fades is a professional hockey player so he's my perfect choice.

6. One villain
I always liked Sebastian from the Mortal Instruments. He'd make things interesting I think.

8. One hero/heroine
Katniss is a hero, lets go with her.

9. One underappreciated character
I don't feel like Eddie from the Vampire Academy/Bloodlines series gets enough love. He does in the book, I just don't think enough people love on him who read the books.

10. One character of your own choosing
Catherine from Until It Fades because I love her and because Brett is coming, so she should be there too.