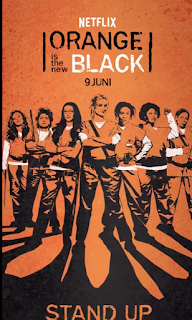 I'm sure many of you know that I am a big fan of Orange Is The New Black. I've done that tag and I've mentioned it a few times on my blog. So as a huge fan I'm sure it's no surprise that I was counting down the hours until this fantastic show began streaming on Netflix.
I woke up at 5:30 in the morning and while my sweet son still slept I binged the hell out of it.
I ended up finishing it completely in the span of three days. The only reasons it took me three whole days to finish are because I do have a son and it's not exactly Paw Patrol material we're working with here, and also because I needed a break between some of the episodes.
I posted on my personal Facebook that I was watching it and mentioned something about Taystee and a good friend of mine commented that she had finished the season and hated it. She proceeded to write a few more paragraphs on how the show has gone downhill and basically thinks it sucks now. She did say a few scenes were good and the acting for some was great but those were about the nicest things she had to say. Well that had me worried! I was only 3 or 4 episodes in at the time so I thought to myself, "Self? Does this mean that these first few episodes have been good and the rest suck?"
Uh. No.
At least not in my opinion.
I'm going to be totally honest with you guys, I did not like season 4. It took me probably a month to actually finish it because I just wasn't as addicted as I usually am. I will say the last couple of episodes got me hooked and I was upset when it was over. But as an overall season I didn't like it.
I was excited for this season because I wanted to see how they were going to pick up from season 4 and I wanted to see all of the characters I love so much. The previews were bad ass too soooo that kind of helped in my excitement.
I think season was the best season since the first 2. I laughed, I cried, I yelled at the stinkin screen. It was incredible.
The acting guys. The freaking acting. Danielle Brooks who plays Taystee deserves every award that's ever been created and future awards that don't exist yet. She was phenomenal. She had me in TEARS!! Her performance was absolutely stunning. If I ever got the chance to meet her I'd just want to hug her and tell her she's the best ever. Like ever.
The other actresses did a fantastic job as well but I think Taystee really was the hit this season and really captured all of us.
In conclusion I have to say again that I loved it. If you haven't checked it out yet you should because...wow. So so good.
Posted by KayleighCalling at 9:00 AM