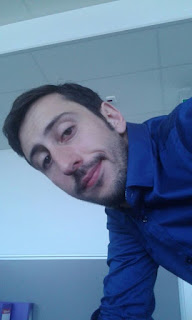 It's my first author interview of the year guys, I'm so excited!! :)
Thank you thank you D.I. Jolly for not only giving me a copy of your book to read (review link below) and review but also for taking the time to answer my questions.
Your time has made me a very happy book blogger, so thank you...again.
Enjoy!!

1. How did you come up with the idea for Mostly Human?
It started while I was waiting for my sister outside her office and I started thinking of a scene involving a brother watching someone break into his sisters office, then transform and go in to rescue her. It never actually made it into the book, but it got the ball rolling. I left my sister to start a 3 hour drive and by the time I got to my destination I had tracked the story back to where I wanted it to start.

2. Has being an author always been a dream of yours?
Since I was about seven years old I wanted to be Gabriel Knight, a fictional character from a video game, who lived in New Orleans, owned a rare book store and was a writer. So pretty much, yeah.

3. Which authors inspire you most?
Robert Rankin for showing me that you can really let your imagination go.
Anne Rice because her writing is beautiful.
And Jane Jensen because she wrote Gabriel Knight.

4. If you could have a barbeque with 3 authors, who would you invite?
Jim Butcher
Neil Gaiman
Bram Stoker

5. If you could be a werewolf for a day would you want to be?
Like the ones I write? Yes, and longer than a day.

6. Who has been your favorite character to write?
Probably Jones P.I. from my first novel A Guy, A Girl and a Voodoo Monkey Hand.

7. If you could have Mostly Human turned into a movie or television show which one would you prefer?
I'd say a movie, or a movie series.

8. In the movie/show who would you want to play Alex?
I honestly couldn't tell you. I don't think I know any actors in the correct age range for young, teen and adult Alex.
That said I think Anne Hathaway as adult Annabel would work well.

9. If you could describe Alex in only three words what would they be?
Kind, driven, scared.

10. If Mostly Human had a theme song what would it be?
First instinct is The Night They Drove Old Dixie Down by the Band, which I listened to a lot while writing it.
If you know the song and the version from The Last Waltz, it starts with a simple lone trumpet then a little build up before they kick of the song. In my head in the movie adaptation Mork could be walking up the gangway plank at the end as the trumpet starts, stop to look back down the dock for a second during the build-up and then cut to black and roll credits when the song really gets going. But that's just how it plays in my head. Also I think that doesn't really spoil anything.

Check out my review for Mostly Human by clicking HERE