The Allure of Dean Harper by R.S. Grey 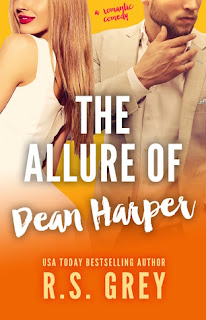 This is the second book I've read by R.S. Grey and I enjoyed it. The first one I did a review on -The Allure of Julian Lefray - which you can check out by clicking HERE
I planned on reviewing this book right after I finished it but it didn't work out that way. It's been a couple of weeks now which isn't exactly bad because it's given me time to think about how I really feel.
Just like The Allure of Julian Lefray I found this incredibly easy to read and enjoyable. I actually took to Lily quicker than I did Josephine, but I love Julian more than Dean.
In the first book - you could read these as stand-alones but you'll get more background if you read them in order - we meet Dean who is one of Julians best friends. If you've read the book then you know he's wonderful. Almost every scene Dean was in made me that much more excited for this book.
Then there is Lily who is Jo's best friend. We don't get a lot of her in the first book because she hasn't moved to New York yet.
Flash forward to this installment and Lily is now living in New York and ends up working for Dean at his restaurant. While it sounds great its not because the two can't stand each other...well for a while anyway.
I liked the chemistry between the two. Some of the scenes between them made me laugh and others were just really good.
I loved that we got to see more of Josephine and Julian because I love them. It was fun to see where their relationship had gone and to see Jo's fashion career bloom.
While the book did make me laugh and overall I did enjoy it I did have some problems with it. I didn't enjoy it as much as the first because I wasn't as invested in the couple. I felt like they hated each other but then two seconds later were together and that was strange for me. If you've been following my blog for a while you know that I'm not opposed to insta-love, I just didn't like it here.
I also couldn't stand Dean for most of the book and that sucked. As I said before I was really excited to read more about him, so to finally get my wish and then to dislike him so much was a huge let down. I will tell you that I did end up liking him more about half way through the book which was good. He just seemed like two different characters between the books so I almost had to forget about the Dean I was originally introduced to.
If you've read the first book and want more of the characters, or you want a light and easy read then I would recommend this, just know the characters aren't exactly who you already know.

Buy The Allure of Dean Harper Here:
Amazon
Barnes & Noble
Posted by KayleighCalling at 7:03 AM