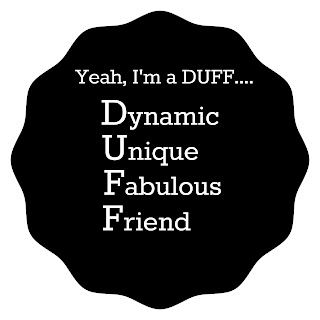 Well hello there friends :)
A few years ago I read the book The D.U.F.F. by Kody Keplinger and really enjoyed it. When I found out that they were making a movie I was crazy excited.
I finally watched it a couple months back and I think they did a great job with it.
I think I love this book/movie so much because it's true: everyone is someone's "duff".
The problem is that some of us don't realize that just because we aren't the most popular, most attractive, or most successful that doesn't mean that we aren't awesome, beautiful and intelligent.
I thought it would be fun to start a series on my blog where once a month I have someone post their story. I want to know a moment where you felt like a duff and then I want to know why you're wonderful the way you are.
I think it'll be fun because it will bring us all together. I want people to know that everyone feels bad about themselves at some point but that you're perfect the way you are.
So for my first installment I'm going to share my story.
I've always felt like I was okay looking but when I was around 16 I wasn't feeling my best. I couldn't find my style yet and my hair was constantly changing so I could find something that worked with my long face. This was the year I started dating a boy on the football team. He was kind of a tool but because I wasn't feeling the best about myself I didn't make him treat me the way I deserved.
This one time my cousin came up to visit. She's beautiful. I mean gorgeous. Not only is she one of the prettiest people I've ever met but she's also one of the kindest. I know what you're thinking, and yes I have always been jealous of her.
Anyway on this vacation my boyfriend met my cousin and it was obvious that he found her attractive but to my dumb little 16 year old self I thought "It's okay that he's looking at her like that, I mean she is incredible."
I brought my cousin to a dance or something and all of the boys thought she was "hot." I tried not to be jealous but I couldn't help it. I had been going to that school for years and I didn't get half of the attention that she was receiving.
I tried to let it go because it wasn't her fault that they all were after her and I went to school the next week with an open mind.
After football practice my boyfriend came out of the locker room and told me he wanted to talk to me.
Ready for this?
He asked me if he could have a pair of my underwear. Excuse me?
Yes, you read that right. A pair of my underwear. Why the hell would he want those I thought to myself.
So I asked him, "Why the hell would you want those?"
And do you know what he said to me?
He said. "So I can show the football team and tell them that they're your cousins."
Yes. He really did that.
I was humiliated. I mean he wasn't exactly a knight in shining freaking armor but I didn't think he was that much of a d-bag. Obviously I yelled at him and then we broke up shortly after.
(P.S. I ended up meeting an incredible boy who made me feel like I was the prettiest girl in the world.)
There you have it my friends, my duff story.
However I told you earlier that just because I'm some ones duff it doesn't mean that I'm not wonderful too.
Now that I'm older I've -for the most part- found my style. I've realized what hair cuts don't work on me and I've finally figured out which clothes fit the best on me. I also learned to play up my eyes because they are my best feature. There are some days that I look in the mirror and think to myself, "Sweet heavens today is not your day in the looks department." But now that I'm older I know that I'm not the only one who feels that way. So now when I look in the mirror and feel that way I try to add something positive. Hair sucks? At least my makeup looks good. Thighs look fat in those jeans? At least my butt looks good.
We need to start loving ourselves and respecting ourselves otherwise people are going to walk all over us and we're going to let ding bats like my ex make us feel like crap.
I hope you liked my story and want to share your own. If you do e-mail me at abookloversplaylist@yahoo.com :)

Since this blog is also  about music I wanted to include a song that makes me feel good about myself and that's Fight Song.
Posted by KayleighCalling at 5:59 AM