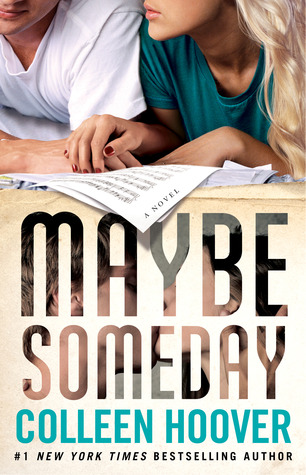 The feelings I have for this book are indescribable.
However I'm going to try my hardest to describe them because otherwise this is a pretty crappy review.

This book is incredible.

I have not laughed out loud and cried this much since I first read The Fault in Our Stars by John Green.

I've read Slammed and Hopeless by Colleen Hoover so I knew she was amazing but she's out done herself with Maybe Someday.

I started this book two nights ago around midnight and unfortunately had to put it down after about an hour and a half because my eyes were tired. I picked it up again last night with the intention of just reading a few chapters. I couldn't put it down! I stayed up until 3 am to finish it. That's dedication people.

Our main character gets screwed over by her boyfriend and best friend who also happens to be her roommate. She obviously doesn't want to stay in the apartment with her backstabbing friend so she ends up going to stay with Ridge.
It probably doesn't seem strange that she goes to live with someone else but she's never actually talked to Ridge. The two of them "met" while on their balconies. Ridge would come out every night and play guitar and Sydney began to put lyrics to his melodies. One night Ridge makes a sign asking for her number so they can possibly write a song together. Annnnd the rest is history.
While living with Ridge, Sydney realizes that she might just have feelings for him...and he just might have the same feelings for her. Unfortunately Ridge has a girlfriend. I know what you're thinking, love triangles? Really? Ugh. But this isn't the kind of love triangle we've read over and over again. Ridge's girlfriend, Maggie, is an incredible person which of course makes it really hard to want him to leave her.
One minute I wanted him with Sydney and the next I was hoping he'd stay with Maggie.
I've read a lot of amazing books that give me a lot of amazing feelings but this is different. You guys just won't understand how good this is until you read it.
I felt SO connected to the characters it was insane! Sydney is such a great character and so is Ridge. (He's also super crush worthy, mmmhm)
I also LOVED Warren (Ridge's best friend, and roommate) and Maggie.
This book is a freaking rollercoaster of emotions but in such a good way.
All I know is that I loved this book and I hope that one day I find someone as amazing as Ridge.
Maybe someday.

Maybe Someday Playlist
(Normally this is where I'd tell you all the songs I picked for this book, however there's already a soundtrack for Maybe Someday and the songs are to perfect to mess with. Here's the track list for the soundtrack, all songs are by Griffin Peterson.)
Living a Lie
Something
A Little Bit More
Maybe Someday
I'm In Trouble
It's You
Hold On To You
Let It Begin
Buy The Soundtrack by clicking HERE

Posted by KayleighCalling at 11:10 AM