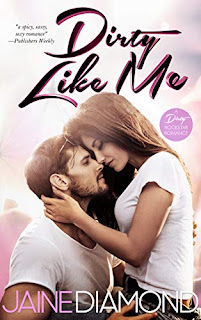 The other day I was looking at the books I've read over on Goodreads and I realized I've had a pretty great reading year and it's only March!

Now I'll be honest, there have been a couple of books that I've been like wtf was that - one that I can think of clearly. But overall I've been pretty lucky.

Some of these books have stuck with me and I was sad to see them end but guys this book? This book!

Dirty Like Me is the first in a series by Jaine Diamond and I literally do not have the words to express how much I f'ing loved it!

So far I've read the first two in the series and I can tell you that - scouts honor - they are pure gold.

Dirty Like Me is about Katie who goes to visit her talent agent friend one day and runs into the hottest man she's ever seen. Turns out this gorgeous piece of man meat is also the lead guitarist for the popular band Dirty and is now doing a solo album. He's getting ready to shoot his first music video and guess what? They cast Katie to play his girlfriend. Even though the two are acting for the video the chemistry is insane and the video skyrockets and blows up the charts. Because of the crazy good reaction Jesse makes Katie an offer.

To be his girlfriend for 6 weeks on tour.

To promote his album.

The plan is to make out and pretend to be in love for the cameras and just be friends when they're alone. But let's be honest, that's not happening.

This book was hot. Like real hot. Jesse is the quintessential rock star and boy oh boy was I swooning. I've read a lot of books where I loved the male but the female drove me nuts sometimes - in fact that's happened a few times this year - but I LOVED Katie. She was so cool with her skateboard and funny with her Bohemian Rhapsody covers. She is the perfect girl because she's true to herself. Together these two were epic romance worthy and I could not love them more than I do.

You know those books you read that once you finish it actually makes you feel a little empty? But it's also an amazing feelings because you feel that way because you loved it that much.

I felt empty and whole after this. That's a conundrum.

I felt empty because it was over. I would miss them. But I felt whole for the same exact reason. I would miss them. They made me so happy to read and I'm thrilled that Jaine wrote a series about the other band members and people associated with the band because now I get to not only learn more but I also get more time with Jesse and Katie.

Obviously I definitely recommend this book!!

Buy Dirty Like Me on Amazon by clicking HERE
Posted by KayleighCalling at 9:00 AM