Walk The Edge by Katie McGarry 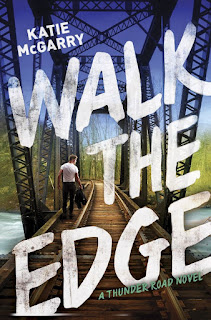 I want to start out by saying that I was sent this book for review. While I do love getting books sent to me, sometimes I get a bit...nervous. I would say 8 out of 10 times I love the book I'm sent but there are those other 2 times that I don't like the it at all. I personally don't enjoy doing reviews on books that I don't like, which is why you don't find a lot on here.
The hard part about being sent a book is I don't really have much choice, I have to review it whether I like it or not.
The other thing I'd like to say is I've read 2 other Katie McGarry books and I'm split down the middle. I didn't like the first one I read at all but I really enjoyed the second one. Because of that I went into this with mixed feelings.
I'm an idiot.
This book is fantastic!!
First off it's told in dual perspectives so yay!! I really wish more authors wrote their books this way because it really helps you get attached to the characters.
The story follows Thomas/Razor and Breanna who are so different they're almost the same.
Bre is the middle child of a large family and she's a super genius. She's known for being the smart good girl and she's looking to shed that image. Not by going all Sandra Dee in black leather and smoking a cigarette - think a bit more subtle. Unfortunately things aren't off to a great start because a classmate named Kyle is trying to get her to write his papers for him and he's willing to do whatever it takes to get her to agree.
Razor is a member of a notorious motorcycle club. People are scared of him because they believe this "club" is actually a gang.
He carries a gun.
He's bad.
He's intimidating.
He's gorgeous.
In the beginning of the book Razor is approached by a police detective who tells him that he doesn't believe Razor's mothers death was an accident. This sets Razor off and he starts to doubt the integrity of the club that he calls family.
One night Bre is waiting for a ride home and finds herself alone with Razor. The thing is he's actually really protective and he goes to sit with her until her ride arrives so she's not alone. Breanna doesn't want Razor to know that while she finds him attractive she's also frightened of him and his reputation. She decides to throw him off by telling him she'll pay him to be her bodyguard.
Flash forward a few days and Bre tells Razor she's going to a bar with her friends and as her bodyguard he decides to go for her protection. Turns out it's a good idea he goes because Bre runs out of the bar crying after Kyle approaches her again.
That night the two of them get close and talk. The chemistry is undeniable but nothing happens.
What we don't see until later is that while the two were together Kyle snapped a picture that insinuates a lot more happened than just talking. Because he's an ass he blackmails Bre.
Razor promises Breanna that he won't let the picture get out but he asks her to help him solve a code dealing with his mothers death. Throughout the story we get to watch their love get stronger for one another but we also get taken on a wild ride.
Walk the Edge isn't your typical contemporary romance. When I wasn't reading it I found myself thinking about it. I wanted to know what was going to happen with Breanna and Razor. I wanted to know if his mothers death was an accident or if Bre was going to be humiliated. This book is equal parts romantic and suspenseful.
If you're looking for something that's got the romance you desire and the suspense that will keep you turning the page then you've found it. I definitely recommend Walk The Edge.Buy Walk The Edge Here:
Amazon
Barnes and Noble

Listen to my playlist for Walk The Edge on Spotify by clicking HERE
﻿
Posted by KayleighCalling at 8:51 AM