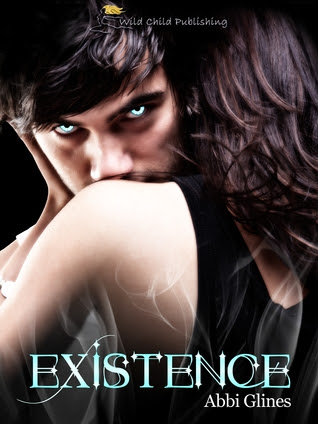 Alright this is just getting silly--Abbi Glines seriously can't write a bad book.
The other day I got all excited about books - which hasn't happened in a while...boo - so I had to make my way over to the library.
As I perused the shelves I saw a pretty cool cover
<--- and thought daaaang look at them eyes. Then I noticed that it said "Abbi Glines" under the title.
I couldn't believe my eyes. An Abbi Glines book that I hadn't heard of? Um can I have that like yesterday please?
I started reading it the other day and literally just finished it.
I -stupidly- went into it not sure if I'd like it because it's paranormal and I had only ever read contemporary romance/new adult by Abbi Glines.
Why do I question her? I mean seriously.
This book was absolutely, incredibly, fantastic!
Our main character is a girl named Pagan who has the ability to see souls that wander the earth. One day she see's a soul who's different than any other she's encountered- he can talk to her.
As soon as the soul talks to her she begins to question him on why he can talk to her when no other soul can. The soul of course can't answer her questions.
One day during school Pagan leaves school upset (the boy she tutors/likes was a butthead) and the soul begs her not to leave. She doesn't listen and as she's pulling out she's involved in a car accident. Later she wakes up in a hospital bed and finds out that the only reason she's alive is because she was thrown from the car. Pagan finds this odd because she always wears her seatbelt. Had someone taken her from the car and saved her? Bum bum bum!
After her accident the soul starts to hang around more and Pagan begins to fall in love with him.
This is unfortunate because 1. He's a soul and 2. She has a boyfriend (the butthead I mentioned previously)
Soooo much happens that I can't tell you because...well...because that would be rude of me to ruin the book for you.
This book reminded me a lot of Twilight in the way that Pagan had this intense attraction to the soul (we later find out his name is Dank) just like Bella adored Edward. However Pagan wasn't as silly or clumsy as book Bella.
If you aren't a fan of Twilight (Is that even possible?) don't let that throw you because it isn't a copy cat story. I just thought there were similarities.
I thought Pagan was a really great character and I absolutely LOVE Dank. Can you spell dreamy? I can, D-A-N-K.
I also really liked Miranda and Wyatt who were Pagans two best friends. I liked her boyfriend Leif too because he was super sweet (turns out he wasn't such a butthead).
If you are a fan of Abbi Glines, a fan of paranormal or a fan of good books then you need to get this book asap. You're welcome.