The Coincidence of Callie & Kayden by Jessica Sorenson 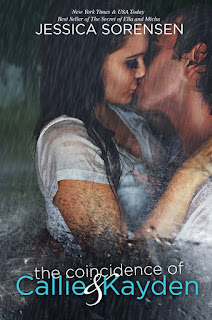 This book is genius. Seriously it's pure genius.
I had actually read "The Secret of Ella and Micha" and while I enjoyed it I wasn't desperatly in love with it.

Well "The Coincidence of Callie and Kayden" is a whole other story people.

I'm hopelessly in love with this book.

The book is about...well...Callie and Kayden.

One night Callie goes to a party to pick up her brother and while looking for him she sees Kayden being beaten up by his father.

She speaks up and Kaydens dad leaves. After he's gone Callie goes with Kayden to help him cleaned up.
However after that she doesn't speak to him again.

Slip ahead a few months and Callie & Kayden are attending the same college.
When Kayden sees her he wants to thank her for basically saving his life that night. However after he thanks her Callie lets him know that it wasn't that big of a deal. She says that anybody would have done the same.
Except not everybody would.

Kayden finds himself to be super drawn to Callie but she's always off.
Why is she off? Because Callie has a secret herself. An issue from the past that haunts her every day.

Even though Callie has all these walls up Kayden doesn't stop fighting to push them all down.

What I love most about this story is that it's got more than just a "romance" aspect to it. Sure the couple fall for each other...it would suck if they didn't. But it also has an intence aspect to it also. It's almost like reading an action book for as fast as it gets your heart pumping.

I would most definatly recommend this book.


The Coincidence of Callie & Kayden Playlist