The Boy Who Sneaks in My Bedroom Window by Kirsty Moseley 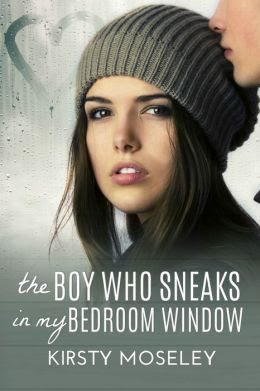 This book frazzles me.
I really enjoyed the story. I've never read anything like this before so it was exciting. I also really enjoyed the love between Liam and Amber. Amber was a cool chick and Liam was totally crush worthy.
However I didn't like it all that much. Confusing right?

There were sooooo many errors in the e-book that it drove me nuts! I never thought i'd be a snob about something like that but it was unbearable. It wasn't just 5-10 mistakes it was like 50-100 mistakes. Grr.
Also I got SO annoyed with the use of the same words. Whenever Amber tried to be sexy the author would say "purred" Like "blah-bitty blah blah" I purrrred. Okay we don't always purr. We aren't cats. She'd also say "waggled" all the freaking time. "I waggled my eyebrows at him suggestively" Why is everyone always "waggling?" Geesh.

Okay okay now that i've said my pet peeves about this book i'll get on with the goodness.
This story is about Amber and Liam. Durr. Amber, Jake (her brother) and her mom used to be abused by Amber's dad. Liam (Jakes best friend and next door neighbor) saw Amber crying through her window (his window faced hers) one night when they were like 8 or something and he snuck over to console her. This pattern kept up and he ended up sleeping in her room every night. 3 years before the book actually begins Jake and Liam beat the crap out of Ambers dad because they catch him about to rape her. So her dad ends up leaving and they don't hear from him again.

Years later Ambers mom works away from home leaving Amber and Jake alone. Liam continues to sleep in Ambers room with her, and while she enjoys their nights he drives her crazy during the day. Eventually she finds out that he likes her and they kiss. Then they become boyfriend and girlfriend. It's really sweet. Really.
He helps her with her fears and she makes him the happiest man in the world. I really do love them.
However a LOT of the things that the author would say were just ridiculous. However that doesn't mean i'd be opposed to reading more from here. I can't even really explain.
Anywho i'd recommened this book if you have time.
Cover: 4/5
Couple: 4/5
Plot: 4/5
Supporting Characters: 4/5
Writing: 2.5/4


The Boy Who Sneaks in My Bedroom Window Playlist
Ours by Taylor Swift
Don't You Wanna Stay by Jason Aldean feat. Kelly Clarkson
Keep Your Head Up by Andy Grammer
Check Yes or No by George Strait
Closer to Love by Mat Kearney
She Is Love by Parachute
Posted by KayleighCalling at 10:28 AM