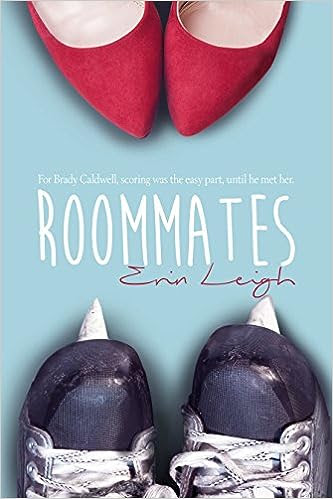 I purchased this book for my kindle a couple of months ago, around the same time that I bought To Love Jason Thorn, and The Allure of Julian Lefray. It was all a part of that whole "Customers who bought this also bought this" deal.
I'm not going to lie to you guys, the cover got my attention. I love the colors and the skates got me excited. I love hockey and hockey players ... ahem ... so I had to read the synopsis. After reading the plot I one clicked that mother and added it to my ever growing TBR.
I finally got to it about a week ago and I enjoyed it.
The story follows Natalie and Brady and is told in both of their POV - heck yes. The two end up being roommates after each of their friends bends the truth a little. See Natalie thinks she's moving in with a girl named BJ and Brady thinks he's moving in with a guy named Nate. Nope.
When the two of them meet each other and realize what has happened their exceptionally skeptical. Natalie doesn't want to live with a boy and Brady doesn't want to live with a girl that he finds so attractive.
However after the two of them spend some time together they realize that they get along really well and being roommates won't be that hard- well as long as the put keep pushing the sexual tension to the side.
I can't help it, I had a bit of a crush on Brady. I really loved the way that he treated Natalie and he was usually pretty funny.
I also thought Natalie was pretty cool most of the time and she seemed like a girl that I would be friends with. I also loved that she worked as a designer for book covers - hello, dream job?!
All in all I thought it was a really cute, easy, and fun read but there were some issues that I had.
I did not like that Brady was such a player. He got around A LOT and was pretty descriptive and gross about his conquests and I did NOT like that.
Also Natalie got on my nerves sometimes because it was like she'd become a different character all of a sudden and was kind of annoying.
The word slut was also used a lot in this book and it got on my nerves. I'm not a huge fan of the word so it bugged me by default but then they used it in situations that wasn't fair. Natalie also used a lot of...um...language that got on my nerves.
Aside from those few annoyances though the book was pretty cute and I would recommend it if you're looking for a light and fun read!!
I'm giving this book 3 out of 5 donuts :)

Listen to my playlist for Roommates on Spotify by clicking HERE﻿
Posted by KayleighCalling at 11:41 AM