The Best Goodbye by Abbi Glines 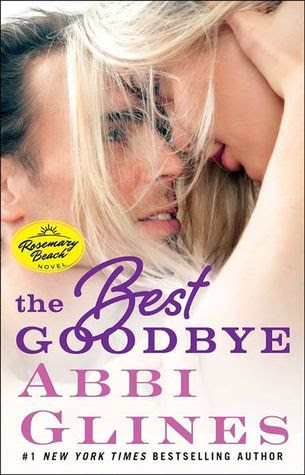 I was contacted by Atria books about a month ago to see if I wanted to review this book.
Um, duh!
Abbi Glines is one of my favorites as you all know by now and The Rosemary Beach series is one of my top 5 favorite series of all time.
This book follows Captain who is Blair's brother and I'm not going to lie I was probably the least excited for this book. Captain is cool and all but he's never been one of my favorites.
Captain is now in Rosemary Beach and he's running a new restaurant when he meets a new waitress named Rose. There's something about her that is eerily familiar about her and it intrigues him but also sort of makes him hate her. Why? Well because she reminds him of a girl he knew when he was younger. A girl that he was in love with. A girl who he thought had died.
As in every Rosemary Beach novel this book is told in dual perspective which I love. I liked Captain more than I thought I would and I also liked his love interest a lot. I thought she was a really strong female character and I really loved reading about their story.
I also LOVED getting to see how some of my other favorite characters have been doing. I think that's one of my favorite things about this series actually. It's so much fun to catch up with characters that I've fallen in love with in the past.
The thing that surprised me is that most of the characters get two or three books and they only get one book. I did think that Abbi gave them enough time though and in retrospect I wouldn't really want the two of them to go through anything more than what they've already been through...so I guess it's good there isn't another book.
I'm not going to lie to you guys though, this is probably one of my least favorite in the series. It's not that it wasn't delicious, I just didn't connect as much with these characters. But I would definitely recommend this book still if you're a fan of the series!!
﻿
Posted by KayleighCalling at 6:21 PM