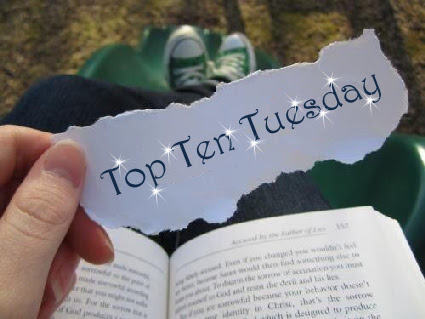 I was bad and forgot to do this on Tuesday...I's sorry.

I was just going to skip this week but it's a good one so i'm not going to.

I know it's two days late but puh-lease forgive me and enjoy! : )

10. Dash and Lilys Book of Dares by Rachel Cohn and David Levithan
Nick and Nora's Infinite Playlist is already a movie so lets make this into one! It would be so much fun! I think it'd make a really cute date movie.


I would've picked the Fault in Our Stars but since that's already being made into a movie i'll choose my second favorite John Green book. This book is so much fun and it makes me laugh so hard. I think it would be a perfect summer movie.


I am a HUGE fan of this trilogy! I would LOVE to see a movie series made out of these books. Ahh they'd be so good! They would be enjoyable because there aren't any movies with the same plot as the books. It would be so interesting to see this in a movie. Plus i'd really like to see who'd play Linden.


This would be a really cool tv show I think. There are enough books and enough characters that you would never get bored. It would be like Sabrina The Teenage Witch but even better :P

5. Can You Keep A Secret by Sophie Kinsella


I think this would make a hilarious movie! I saw Confessions of a Shopaholic which was also a Sophie Kinsella book and I thought it was super cute! Can You Keep A Secret is my favorite of her books and I think a movie would be so girly and adorable.

4. Between The Lines Series by Tammara Webber


I would love to see this series as a television show. So much happens during the four books that they could definatly feature in a show. The other bonus about it being a tv show instead of a movie is that I get more of the characters! :)


Do I really need to tell you why i'd love to see this as a movie? Yes? Travis Maddox. That's why.


Um. Yum. This would be an amazing movie! To be able to see Rule and Shaw in person would be so cool! This should become a movie. Like now. Oooh boy would it be delicious.

1. The Lux Series by Jennifer L. Armentrout
Daemon on the big screen? Hot damn. I would LOVE to see this series become a movie!
Posted by KayleighCalling at 5:12 PM