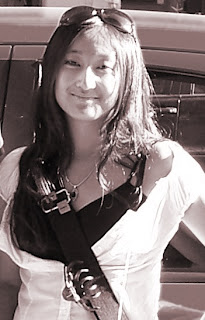 I don't know if all of you are aware of this but I am the luckiest person on the freaking planet.

I got to interview Kendare Blake!

I'm still jumping around as i'm typing this!

She was awesome to get to talk to and I feel soooo stinkin' special to have had the chance to interview her!

Some of her answers made me laugh really hard so be warned that she's really funny.


1. There are so many Y.A. books about vampires and werewolves, why did you choose to write about a ghost?

I don't know that it was a conscious choice. The character of Anna showed up and I knew I wanted to write about her. But I don't really think of her as a ghost. I think of her as a dead girl. The distinction is small, but I think it's there.

2. Since you are a female what made you want to write Anna Dressed in Blood and Girl of Nightmares in a boys point of view?

Again, I don't think I decided. Cas just started to tell the story. Looking back, I'm lucky that he did. It would have been an entirely different (and shorter) book if I'd been stuck in that house with Anna the whole time.

3. My favorite characters are Anna and Thomas. Which character did you have the most fun writing?

Thomas was definatly a kick. I loved getting to know him right alongside Cas. And Morfran too, Thomas' voodoo grandfather. What a salty old dude.

4. Would you ever want to have the same job as Cas?

If I had his natural ability to kick murderous dead ass? Sure. Why not. It'd be something to do on a Tuesday night. But I'd probably scream a whole lot more than he does.

5. Have you ever loved a book sooo much that you wish you had written it?

6. Does music ever influence your writing?

Sometimes I'll hear a song and want to write a story that evokes the same emotion that the song evokes. For the last third of the last book in The Goddess War trilogy, I did keep the same old CD on repeat, but that's rare. I'm preparing to shut everything down after this interview is over, to achieve total silence for the book i'm starting now.

7. If you could do a book tour with any author who would you choose?

Any of them I've met so far, because they're all excellent people to hang out with. Maybe JK Rowling, so I wouldn't have to say anything, and could just spend the tour staring at her.

8. If you could be best friends with any character from any book, who would you choose?

Hmm. Maybe Lestat from Anne Rice's Vampire Chronicles, because I feel like he's high maintenance but would be worth it. Or how about Legolas from Lord of the Rings? Sure, he's not that great for conversation, but I'm assuming I'd get to be in friggin Middle Earth, so there's a tradeoff.

Well, Stephenie Meyer and Meghan Hibbett's production company Fickle Fish Films is working on turning Anna into a movie, so I definitely want that to happen! I have no particular wish on who would play her. My Anna is a voice and a shape through blurry glass. I see pieces of her but never the whole girl at once. I never imagined anyone as having her face. But there have been lots of suggestions from readers: lovely, grounded, dark-haired actresses.

This one is easy...The Fiona Apple cover of Sally's Song from The Nightmare Before Christmas.
http://www.youtube.com/watch?v=4JtnI_tvXmA